“WE’VE shown what’s possible when the world stands as one,” declared Barack Obama after UN climate talks in Paris ended with an agreement on December 12th. “Our collective effort is worth more than the sum of our individual effort,” said Laurent Fabius, France’s foreign minister, who oversaw the talks. “I can go back home to my people and say we now have a pathway to survival,” said Tony de Brum, the Marshall Islands’ foreign minister, voicing an opinion shared in other low-lying spots where people are terrified of rising sea levels.

The deal inspiring these eulogies was indeed stronger than had been expected. The 195 countries at the meeting agreed on the goal of keeping the increase in the global average temperature to “well below 2°C above pre-industrial levels and pursuing efforts to limit the temperature increase to 1.5°C above pre-industrial levels”. They will also pursue a goal of zero net emissions—removing as much greenhouse gas from the atmosphere as is being added to it—by the second half of the century.

In all, 187 countries have vowed to make “intended nationally determined contributions” (INDCs). Their pledges are lodged with the secretariat of the UN Framework Convention on Climate Change (UNFCCC), which convened the Paris talks. The limits these place on future greenhouse-gas emissions are too weak to ensure that the agreed limit on warming will not be breached (see chart). Yet the deal still signals progress on a number of fronts. It is the sort of success, those urging climate action insist, that will start a virtuous circle for further progress. 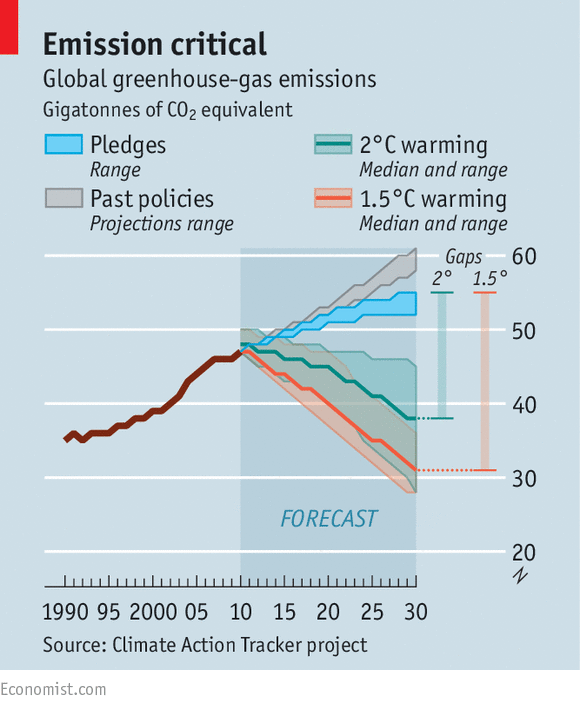 The main sticking points were deciding who should do what—and who should pay. The UNFCCC, which dates from the 1992 Rio Earth Summit, calls on nations to act “in accordance with their common but differentiated responsibilities”. This “differentiation”, which distinguishes between rich countries and the rest, was a feature of the UNFCCC’s first offspring, the ill-fated Kyoto protocol. That committed developed countries—responsible for almost all greenhouse-gas emissions to that point—to emit less but demanded almost nothing of developing ones. For big developing economies, maintaining this distinction has long been a priority.

In Paris the line started to blur, partly because holding the world’s biggest emitter (China) and second-biggest (America) to drastically different standards was hard to sustain. The new agreement requires a flow of $100 billion a year from developed countries to developing ones by 2020, much of it to be spent on adapting to climate change, rather than attempting to stop it. The total is to be reconsidered in 2025, and donor countries are required to provide explicit updates on what they will be giving, and to whom, every couple of years. Though most of the money is expected to come from rich countries, others are “encouraged” to pitch in, too, if they can afford to.

That is a big step away from the previous hard line on differentiation. Similar progress was seen elsewhere, for example in the framework that lays out how to ensure that countries are doing what they say they are. It looks as though efforts in large developing countries will be subject to more scrutiny than in the past.

But there remains the awkward fact that the INDCs are not remotely strong enough to ensure the 1.5°C pledge is honoured. This serious flaw was foreordained. The experience of Copenhagen, six years ago, showed that insistence on a pre-set goal would make agreement impossible: in a zero-sum game all players will want others to do more while they do less. Having countries sign up only to what they think they can do made agreement in Paris possible—but ensured that it would be weak.

The actions outlined in the Paris pledges would be expected to lead to global warming of around 3°C. Given that there has already been about 1°C of warming, the measures required to stay below 1.5°C would be beyond heroic. Work by Joeri Rogelj of the International Institute for Applied Systems Analysis near Vienna and colleagues suggests that it would mean net emissions having to fall to zero in at most 40 years. 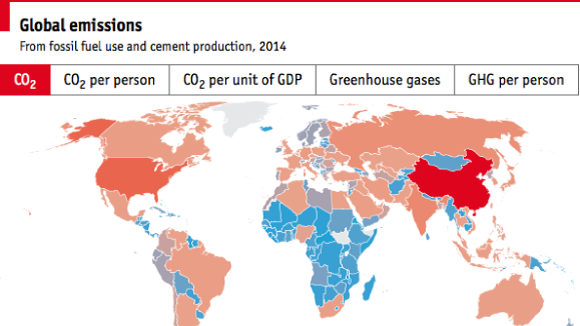 INTERACTIVE: From CO2 to GHG, which countries have the highest emissions?

The 1.5°C limit is thus a symbol rather than a goal: a demonstration that the risks of climate change are being taken seriously. The 3°C implied by the INDCs, however, is not the last word. The Paris deal includes mechanisms to ratchet up the ambitions of national pledges. Fresh talks will be held in 2018 to take stock; countries will set themselves a new set of goals in 2020. The stock-taking and goal-setting will be repeated every five years. That process should become easier as low-carbon energy becomes cheaper. The existing INDCs include a lot of renewables: the pledges from China and India alone could double the world’s wind and solar capacity within 15 years. As these plans are carried out, and new technology projects start to bear fruit, the next generation of investment should provide more bang for the buck.

Even so, most experts agree with John Holdren, Mr Obama’s science adviser, that limiting warming to 1.5°C will require that some of the carbon dioxide emitted in the first half of the century is sucked back out of the atmosphere in the second half. Reforestation could help (see article). But to soak up really large amounts of carbon will require technologies capable of storing carbon dioxide deep underground.

One idea is to grow plants—thus sucking carbon dioxide out of the atmosphere—burn them in power stations and bury the resulting carbon dioxide. But doing this at the scale required would mean growing fuel over millions of square kilometres. The world does not have that land to spare. An alternative would be some sort of industrial process. At present, though, there is no proven technology capable of working on anything like the scale required, let alone at a reasonable price.

When the dust settles

Even so, the undeniable progress made in Paris has led boosters to hail it as the beginning of the end of the fossil-fuel era. Though some parts are not binding, analysts say that the prospect of demand for oil peaking in the next few decades and then declining may have added to the bearishness that has recently pushed oil prices below $40 a barrel. A long rout in shares of coal-mining firms has deepened. On December 14th Peabody Energy, America’s largest coal miner, fell by 13%.

Coal firms, however, are clinging to the hope that developing countries will provide enough new demand to persuade investors not to dump their shares. India, for example, generates 71% of its electricity from coal. Its INDC makes no commitment to cut total emissions; its pledge to install 100 gigawatts (GW) of solar power capacity by 2022, up from just 5GW now, would require reforms to its electricity sector that stretch credulity. Such weaknesses in pledges may stem the rush out of fossil fuels. China’s emissions-trading scheme, due to start in 2017, may well fail for lack of transparency. And its offer to ensure that emissions decline after 2030, though perhaps plausible, is somewhat undermined by the fact that no one quite knows how much carbon it emits now. Recent research has come up with wildly varying figures. Energy markets may respond only when national governments are seen to be serious at home about the environmental pledges they have made abroad.

Meanwhile Paris may inspire leaders of cities and companies to redouble their efforts. Firms including Apple, Google and Unilever are taking steps towards cutting their emissions by large amounts, as are some big cities, including Hong Kong, London and Rio de Janeiro. An agreement marking international acceptance of the risks of climate change, and the necessity of co-operating to tackle them, will bolster such efforts.