3 billion barrels in storage seems like a lot. It is not.

Demand is increasing supply is not.

Geopolitical risks are totally priced out of the market.

The price for a barrel of oil has dived well under $40 in recent days making new multi year lows. The recent decision by OPEC to leave production policy unchanged has oil traders panicking. The large global cushion of oil in storage seems to indicate a never ending oversupply. The market is completely mispriced particularly if one is thinking in the 6 month or one year time frame. High production levels and the large amount of storage are totally priced into this market. Rapidly increasing demand and dire geopolitical risk are not. Ignore the oil traders, they are wrong this time. The time to sell was $75 ago. Now is the time to begin to get long again.

US oil production has been steady since December of 2014. Production reached 9.4 million bbls per day during December of 2014, peaked at 9.6 MM bbls/day in April of 2015 and currently the trailing 4 week average stands at 9.2 mm bbls/day. US oil production has been slowly ebbing lower since April. Moreover this slow trend lower will continue into 2016 and perhaps beyond as the current drilling rig count is 737, the lowest level since late 1999. The total amount of crude oil and refined products in storage in the US has finally leveled off. Petroleum in storage steady grew all year long until September where it has held around 1.3 billion barrels.

OPEC production and Saudi production have leveled off albeit at high numbers. OPEC is producing just fewer than 32 million bbls per day. This level has held for the 3rd and 4rth quarters of 2015. The results of the recent OPEC meeting are that this level will hold for a while longer. Outside of Saudi Arabia OPEC has no spare capacity. The Saudis claim to be able to produce 12 million bbls per day, but many including this author believe they cannot produce at that level for more than a month or two at best. The current Saudi production at about 10.3 million per day is the longest sustained high production output from them in a long time. It is telling that there is more drilling activity inside Saudi Arabia than in a long time. They have to drill more and more wells to maintain these high production levels. Saudi and by extension OPEC production will not rise any more than current levels.

The IEA in its recent Oil Market Report stated that there was a 3 billion barrel cushion against higher prices. Many news outlets ran stories about how enormous this number is; Oil prices of course reacted negatively. This statistic is very misleading. It is not nearly as bearish as it implies. I have included the graph below. Total OECD oil stocks stood at 3 billion bbls as of October. The world consumes about 95.5 million bbls per day of petroleum. 3 billion barrels then is 31.5 days’ supply for the world. Not an overwhelming amount. Moreover look at the long term average of the OECD total stock level. For the period 2010- 2014 the average varied between 2.65 billion to 2.75 billion bbls, a very steady number. Thus 3 billion is only 300 million bbls or 10% above the long term average storage levels. Again not big numbers. Finally examine the total crude and products storage chart for the USA below. One could argue that the entire 300 million barrel surplus is in the USA. Between March of 2015 and Sept of 2015 the amount of total petroleum in storage in the USA rose by 300 million bbls. 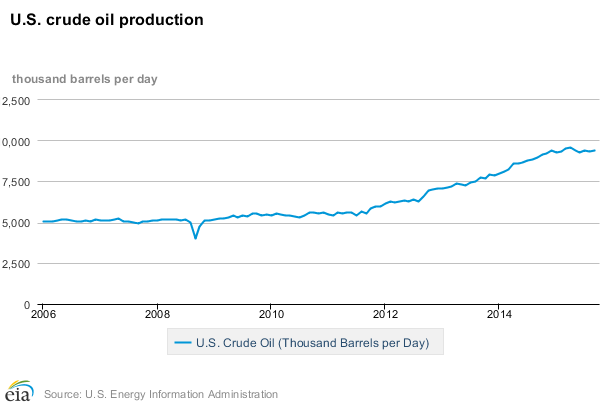 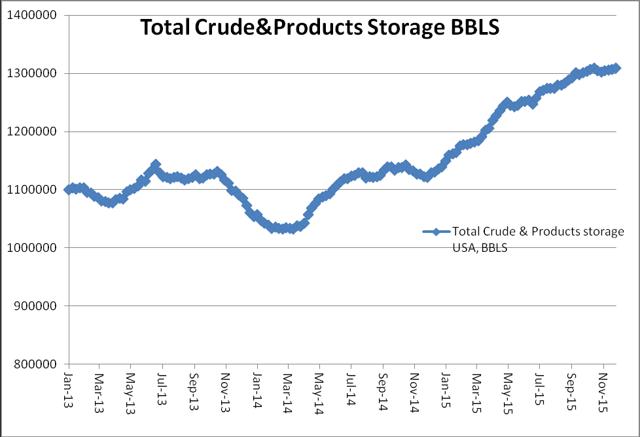 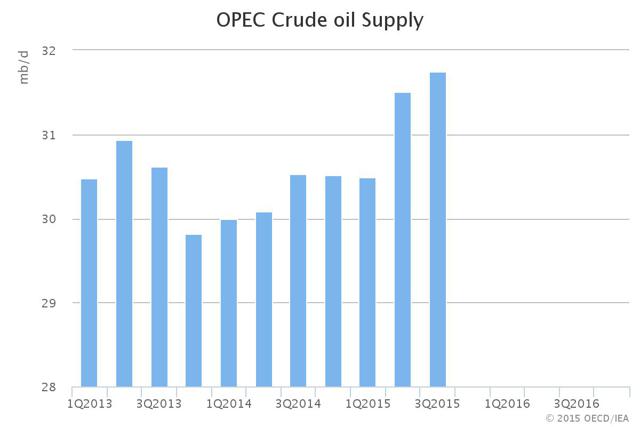 Global oil demand growth surged in 2015 to 1.8 million bbls per day the highest growth number in 5 years or more. As a matter of fact the growth rate was 2.1 million per day in q3. The IEA and everyone else underestimated this number. Doomsayers about China were simply wrong. Chinese oil demand grew by 800,000 bbls per day much higher than predicted. Demand growth in India exploded to its highest level in a decade adding nearly 600,000 bbls per day. The China and India graphs are below. 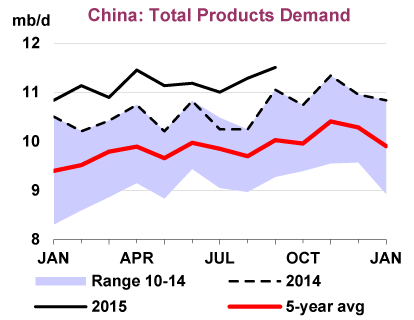 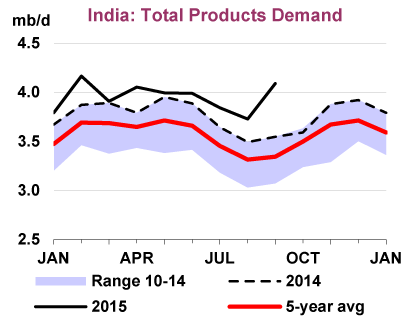 The IEA report estimates that global demand growth will slow down in 2016 to 1.2 million bbls per day. This is based largely on weak Chinese PMI number recently as well as the expectation that rising interest rates in the USA will curb growth. The IEA underestimated demand growth this year and I believe they have done it again for next year. There is every reason that global demand will grow by another 1.8 million bbls per day next year. Growth in India is screaming driven by easing of regulations in their country, a burgeoning middle class and low prices. China doomsayers have been rampant in recent years, but growth in petroleum demand has been steady driven by low prices and a growing middle class. China also will not disappoint next year.

Demand in the USA has been growing driven by low prices and surging sales of SUV’s and pickup trucks. This trend will not end soon. Rising rates will not derail it in fact when the FED finally raises rates the relief at the end of the interminable waiting game may be so palpable that growth actually increases. One thing rates won’t do is stop bubba from getting a new pick up or the suburban mommy from getting a new Suburban. Only a massive gas price increase will do that. USA demand charts below. 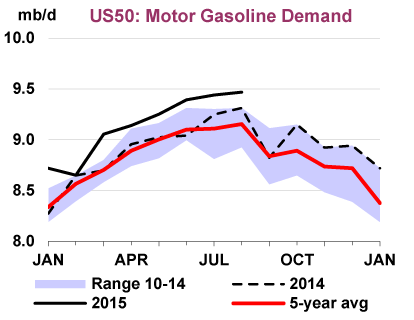 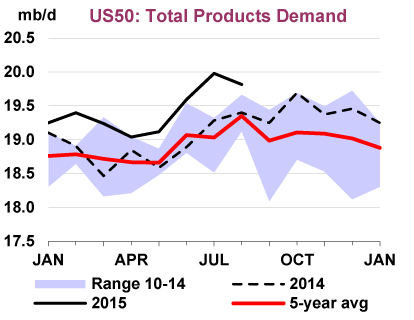 GEOPOLITICS HAS BEEN PRICED OUT OF THE MARKET

The oil market has no risk premium attached to it and yet there is more risk to supply disruptions than at any time since the 1980’s Iran Iraq war. Recent events have shown that ISIS’ reach is global. If ISIS can reach San Bernardino and Paris how difficult is it for them to foment terror inside Saudi Arabia or to reach Yanbu or Ras Tanura the great Saudi oil ports? Civil wars rage in Libya, Syria and Yemen. Russia and the west are bombing oil fields to prevent ISIS from earning money. Iran, Saudi Arabia’s long time antagonist, is about to get a $100 billion plus cash injection with which it will do no good. ISIS controls large parts of 3 countries. Nigeria is fighting Boko Harum terrorists among others. The point is not to speculate what might happen. The point is that under$40 per bbl the market is confident that nothing could possible happen to disrupt global oil supplies and that is simply wrong. In the oil markets all the black swans are higher.

Global oil production is high, but has leveled off. US oil production is slowly dropping and at current rig numbers this will continue. OPEC production is high, but steady and will not grow. Demand growth was massive in 2015, rising by 1.8 million bbls per day. Growth was strong in China, India and the USA. Although the IEA believes that growth will slow in 2016 I believe that they are wrong. Low petroleum prices will continue to be the global driver of surging demand. I think that 2016 global demand growth will be as strong as 2015.

Oil priced at $40 or under for spot and $45 or so for deferred takes into account only the current oversupply and does not take into account at all the shift in the supply demand balance that will take place during 2016. Moreover current prices completely discount any possibility of geopolitical risk causing supply disruptions in the Middle East. I think that during 2016 oil prices will rally 50% from these low levels. Invest accordingly.