Two key events could impact oil prices in a big way on Wednesday.

Petroleum inventory data will be reported by the EIA at 10:30 AM ET and it is a powerful factor for oil prices.

The Federal Reserve will publish its latest Monetary Policy Statement at 2:00 PM ET, and it could swing both energy commodities and equities.

Wednesday will be eventful at minimum and epoch at best.

Oil prices could express significant volatility again on Wednesday, rising and/or falling significantly intraday. Two critical events could influence the price of the commodity, and have the potential to knock it around like a pinball wizard would the silver ball. The two data points are the weekly oil inventory data and the Fed’s Monetary Policy Statement. 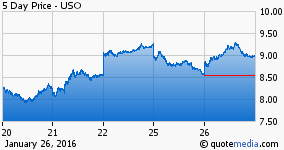 Charts like this 5-day chart of the United States Oil (NYSE: USO) security reflect volatility in oil prices, and plenty of it recently. The CBOE Crude Oil Volatility Index at $65.99 is up near its highest close for last 52 weeks, though it hit $74.29 at its highest intraday mark over the trailing twelve months. This Wednesday presents two critical factors that could flip oil prices in a big way again, either higher, lower or in both directions.

Oil prices were already rising Tuesday in anticipation, I believe, of oil inventory data from the American Petroleum Institute (API) and Energy Information Administration (EIA). It’s my view that last week we began to see a change in inventory trend. In a report earlier this month, I said the catalyst for an eventual energy and equity market rally could be when weekly oil & distillate drawdowns begin to be reported. We’ve passed the seasonal peak point for oil inventory, but the season has not been like normal until the last two weeks or so, with cold and snow covering much of the heating oil burning Northeast U.S. I suspect this past week’s weather and anticipation for it may have helped a favorable impact to inventories. I hear experts on business television calling for another big build in inventory, so it would be a positive surprise to see something smaller or a drawdown of inventory.

Despite last week’s build in petroleum stocks, after the fact, oil prices still managed to rally into the end of the week. With rumblings out of OPEC about possible production cuts every time oil falls into the upper $20s, a floor may be in place now. Maybe we have an OPEC put. Thus, even if we get a data point that’s imperfect tomorrow, oil can rally again thereafter.

If oil prices do rally, that rally could be stymied or perpetuated further when the Federal Open Market Committee (FOMC) publishes its latest Monetary Policy Statement. If the Fed in any way indicates or implies it could progress this year at a slower than previously forecast pace of four rate hikes, then a strong rally should ensue for both energy and equities. But if the Fed holds to its old course, or fails in any way to appease market concerns, then any rally begun by energy inventory data could get shut down.

And then there is the worst case scenario. If energy inventory disappoints by a wide margin and the Fed still remains stubbornly hawkish, energy prices and stocks could retest lows discovered last week. Expect Wednesday to be eventful at minimum and epoch at best. I follow the markets closely and invite relative interests to follow my column here at Seeking Alpha.