Stocks fell around the world, with the Dow Jones Industrial Average falling more than 250 points as oil’s renewed plunge toward $30 a barrel in New York rekindled concern that global growth is slowing. Treasuries rose with the yen.

The Dow average tumbled as Exxon Mobil Corp. fell after reporting its biggest earnings slide in more than a decade, while BP Plc was among the biggest losers in Europe after its quarterly earnings slumped 91 percent. Russia’s ruble led a retreat in high-yielding currencies after U.S. oil dropped as much as 4.6 percent. Yields on 10-year Treasurynotes sank below 1.90 percent. 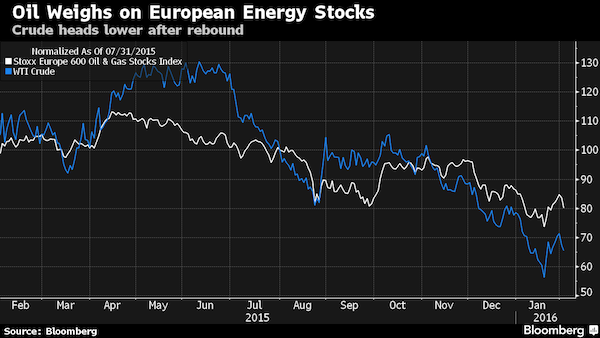 Energy prices are crumbling as expanding U.S. stockpiles reinforce concern over a global glut, and a Citigroup Economic Surprise Index shows data in Group of 10 economies are falling short of estimates by the most since May 2013. Corporate results in the U.S. and Europe are threatening to join the list of worries — including China’s slowdown and oil’s slump — that are roiling global financial markets in 2016.

In the U.S., Senator Ted Cruz won the Iowa Republican caucuses in an upset over billionaire Donald Trump and Senator Marco Rubio of Florida exceeded expectations with a strong third-place, while Democrat Hillary Clinton’s campaign declared victory in the closest-ever Iowa Democratic caucus.

“People are very spooked about what they can’t see, and at the moment they can’t see where global growth will come from,” said Justin Urquhart Stewart, co-founder of Seven Investment Management in London, which oversees about $13 billion. “In a market like this, less certainty around the U.S. election cycle will add further nerves. The last thing investors need is more background noise.”

The Standard & Poor’s 500 Index dropped 1.6 percent at 1:05 p.m. in New York. The index is off to a weak start to February after registering its weakest start to a year since 2009. Equities rallied at the end of last week after signals from central banks in Europe and Japan that additional stimulus would come if growth slowed. The S&P 500 is now 10 percent from its May record.

“Rallies right now are short, sharp and don’t last very long,” Michael O’Rourke, chief market strategist at JonesTrading Institutional Services LLC, said by phone. “A lot of last week’s rally was a technical, one-time thing. The Bank of Japan can’t do negative rates every day, and you had a month-end reshuffling that put a strong bid into equities so we’re seeing an unwind. Energy and financials are the worst and Exxon and Deutsche Bank earnings don’t help the situation.”

Oil-services provider Schlumberger Ltd. fell, while Exxon dropped 2.2 percent after posting its fifth-straight quarterly profit decline. Pfizer Inc. slipped 1 percent after its 2016 earnings outlook fell short of predictions. Class A shares in Google parent Alphabet Inc. rose 3.5 percent after its main business reported profit and sales that topped estimates, and it is on course to surpass Apple Inc. as the world’s most valuable company.

More than 100 S&P 500 companies post results this week, with Pfizer Inc., Yahoo! Inc., and Exxon Mobil are among those reporting today.

“When you come right down to it, the equity market is all about the profitability of corporations and it’s not that bad but it definitely could be better,” Ron Anari, the Jersey City, New Jersey-based senior vice president of trading at ICAP Plc, said by phone. “A lot of people are watching the price of oil and as big as the U.S. economy is, there is now a perception that global economies are more important than regional ones. At this state of the game there is just a lot of market ambiguity.”

The MSCI Emerging Markets Index fell for the first time in five days, decreasing 2 percent, as more than two shares declined for every one that advanced. Benchmarks in South Africa, South Korea, Malaysia and the Philippines lost at least 0.9 percent and Hong Kong’s Hang Seng China Enterprises Index fell 1.1 percent.

The Shanghai Composite Index jumped 2.3 percent with trading volumes 24 percent less than the 30-day average. The People’s Bank of China pumped 100 billion yuan ($15 billion) into the banking system using reverse repurchase agreements on Tuesday, adding to last month’s injection of about 2 trillion yuan, as demand for cash rose in the run up to the lunar new year holidays next week.

The euro advanced against all major peers, posting the biggest gains versus the currencies of raw-material producing nations including South Africa’s rand and the New Zealand and Australian dollars. Europe’s shared currency climbed 0.3 percent to $1.0925, while the yen appreciated 0.2 percent to 120.72 per dollar.

The pound declined after European Union President Donald Tusk published a draft agreement on Tuesday aimed at satisfying U.K. Prime Minister David Cameron’s demands for changes to the EU and paving the way for a referendum on Britain’s membership in the bloc as early as June. It was 0.3 percent weaker at $1.4388 after earlier sliding as much as 0.7 percent.

Yields on U.S. 10-year Treasuries slipped three basis points to 1.92 percent and the yield on similar-maturity U.K. gilts dropped four basis points to 1.58 percent. The Citigroup Economic Surprise Index, which measures whether G-10 nations’ economic data are above or below analyst estimates, has been negative since mid-December.

German government bonds gained as a gauge of the region’s inflation outlook reached the lowest in just over a year. The five-year, five-year forward inflation swap rate– which measures the price-growth outlook for a half-decade starting five years from now — dropped to the lowest since January 2015.

Base metals rallied, with zinc climbing to the highest in almost three months, as news offurther stimulus in China increased expectations of greater demand from the world’s top commodity consumer.

The move higher, which saw zinc lift 0.7 percent to $1,660 a metric ton and copper push to a three-week high, was amplified by short-covering, according to Citigroup Inc. analyst David Wilson.