U.S. crude oil output is now closing in on 9.5 million b/d, the highest levels in two years and almost double what we were producing a decade ago. But, while our demand has basically been flat, oil is a global commodity and imports have long been ingrained in our own market, so we still import about 35-50% of the oil that we use. Imports though have been falling, yet probably not as much as some energy security advocates want. Overall, China has surpassed the U.S. this year to become the world’s largest crude importer, soaring to 9.2 million b/d in March.

Especially since we export so much oil now (as I document here), the need to import lots of oil might be confusing to some. Yet, the need to import amid very high output is a matter of logistics, where pipelines, contracts, varying refinery configurations, costs, and numerous other considerations come into play: “Why importing and exporting oil makes sense.” Trade is a foundational principle of our economy, and oil is the world’s most traded commodity, interestingly above coffee (here). 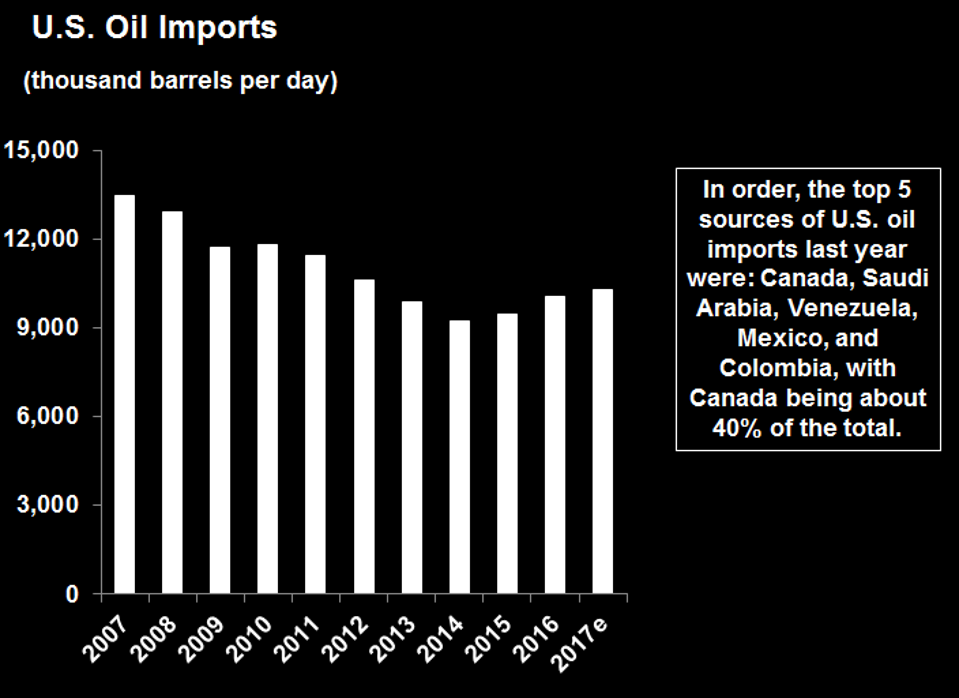 Indeed for oil, Western Canada Select is the world’s cheapest crude. So, the good news about high U.S. oil imports is that neighbor, ally, and democratic Canada has displaced the more risky and undemocratic OPEC members. Unfortunately as I document here, the opposite has been true in our top oil consuming state, California, where “green oil laws” put Canadian suppliers at a clear disadvantage. In short, anti-Canadian oil environmental policy in California (namely the Low Carbon Fuel Standard) favors the “lighter, cleaner” oil that comes from OPEC.

In almost all categories, the Saudi Arabia-led OPEC nations are ranked as “not free,” with the oppression of women scarily common. Canada, meanwhile, might be the “freest nation” on Earth. This is kinda a big deal: although you keep hearing about “electric vehicles,” California still devours some 45 million gallons of gasoline every day. In fact, Saudi Arabia is now cutting exports to the U.S. in particular to help balance the oversupplied oil market.

Let me digress for a paragraph on the oil market overall. The key news this past week was that the oil market seems to finally be shifting into backwardation. On Wednesday, for the first time since April 2016, the front-month Brent contract was higher than the second-month contract, a trend spreading to subsequent months along the oil futures curve. Backwardation would be a gift for OPEC and will make storing oil less attractive while also reducing the hedging ability of U.S. producers.

The value of U.S. oil imports from Canada last year was around $50 billion. The U.S. market is really the only release valve that Canadian oil producers have: oil and gas export facilities off the coast of British Columbia to reach surging Asia have struggled to take flight. Canada has an immense 180 billion barrels of proven oil reserves, and production could boom by 40% over the next 10 years or so. And with low incremental needs in Canada, much of this crude should flow to the U.S., where I document here how demand will remain “buoyantly very high.”

The main reason U.S. imports are still very high though is because our shale oil boom and the light oil surge hasn’t been a great match for our refiners. The heavier oils from Venezuela, Mexico, and Canada (i.e., crudes with lower API gravity) are critical for us because our refinery system, especially along the Gulf Coast, is built to process these thicker grades. Not to mention the pipeline pushback that means that rising U.S. supplies often cannot reach certain areas, so imports become essential.

Just a knowledge point…Venezuela’s leaders should know that the country will be in even worse shape if widened U.S. sanctions mean that we stop importing Venezuela’s crude, given A) that our advanced refinery system means we are uniquely suited to buy Venezuela’s heavier crude and B) the fact that we pay hard currency for Venezuela’s oil, whereas others like China have so-called “oil-for-loan” arrangements.