home Production, Refining When Will Mexico Start To Frack For Natural Gas?

Mexico has fracked just a few test wells, while the U.S. has had nearly 2 million commercial ones. Mexico hasn’t yet produced shale gas, compared to the U.S., which now that the Anadarko play in Oklahoma has been added to the EIA’s Drilling Productivity Report on 7 shale plays is producing 60 Bcf/d of shale gas – over 80% of total national production (here).

Thanks to the 2013 Energy Reforms that loosened monopoly laws, Mexico’s energy sector is now far more open to foreign investment. The National Hydrocarbons Commission envisions fracking from unconventionals within a few years, but probably no significant levels until sometime after that.

There are key obstacles to producing shale gas in Mexico: a lack of knowledge on unconventional resource geology, higher costs, smaller service industry, poor regulatory framework, pipeline dearth, lack of security amid narco-trafficking, water shortages, and others. Not to mention that the recent massive demonstrations against rising fuel costs: deregulation was sold to a skeptical public as the path to “lower prices.”

Finding some way to produce more natural gas might be Mexico’s most vital energy goal. Mexico has been moving away from fuel oil- and diesel-fired electricity, so gas now accounts for nearly 60% of all power generation and this could reach 72-75% by 2022. Mexico’s domestic gas production, however, has continued to fall, mostly because it’s produced as “associated gas,” which comes along with oil production. Mexico’s oil production is down 30-35% in the past decade.

Mexico has been importing 4.2-4.5 Bcf/d from the U.S. in recent weeks, and we now account for 60% of Mexico’s total usage. Rio Grande, Texas (~43%) and Roma, Texas (~12%) are the main exit points for our gas to Mexico. And as I document here, short pipeline infrastructure amid surging demand has installed Mexico as the largest buyer of U.S. LNG, taking in more than 140 Bcf of gas (23% of the exported U.S. LNG total). 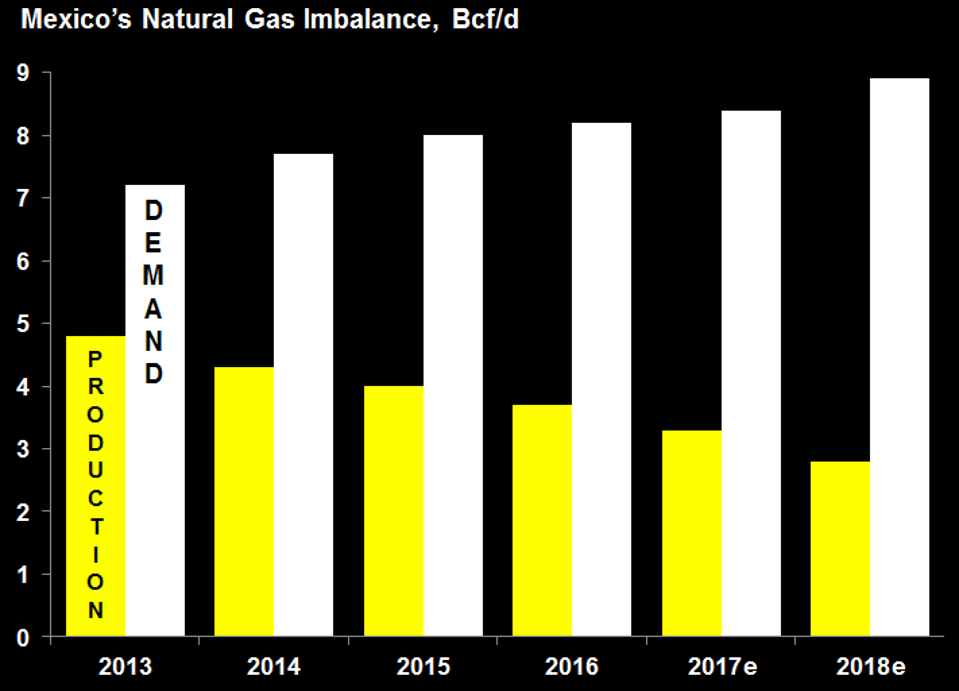 Mexico’s gas imbalance is expected to continue to increase.

But, the impetus for Mexico’s deregulation was to produce more, not import more from the U.S.  Let’s be clear: more oil and gas production is seen as the path to real national energy security, especially since the U.S. has big plans to export much more oil and gas to other energy thirsty nations around the world. For example, by 2020, the U.S. capacity to export LNG will boom 5-fold to over 10 Bcf/d.

The biggest problem for Mexico to develop its unconventional resource base is the current low-price environment. Mexican gas prices are linked to those in the U.S. (particularly the Houston Ship Channel) and our Henry Hub prices have sunk nearly 70% in the shale era to today’s ~$3.00 per MMBtu.

Much more information is needed on Mexico’s portion of the Eagle Ford and potentially even the Permian Basin – both hugely important shale plays because they produce huge volumes of both oil AND gas. Broad 2D-seismic imaging has been done in the resource heavy Burgos Basin in the northeast, but there’s been very little of the 3D variety.

Some private firms have been mapping, but there’s a strict timeline for profiting from the sale of that data to exploration and development companies. That’s because after a 10-year period, the National Hydrocarbons Commission takes control of the geological data on hydrocarbon reserves.

Mexican officials know that U.S. LNG will remain imperative because of the country’s capacity constraints. One option for Mexico is to follow the expensive (here) “New England model” and rely on imported LNG during peak periods. Just as importantly, Mexico is now focused on developing underground storage options, with preliminary government plans to be published by September.

Mexico has just a few days of capacity to store gas, compared to nearly 3 months for its OECD allies. Mexico also needs the development of its own domestic gas price indices along pipeline connection points, perhaps to be centered in the industrial center of Monterrey – “The Growing Role of Mexico in the North American Automotive Industry.”

EIA estimates that Mexico has nearly 550 Trillion Cubic Feet of recoverable shale gas (here). Hopes are high. Deregulation is sure to eventually help produce more hydrocarbons, and the country will need 15 successful upstream auctions to reach output goals (here). Petroleum, however, is destined to remain the focus: ~90% of Mexico’s historical hydrocarbon production has been crude.

After long infighting, Mexico is just now starting to realize the positive effects of deregulation. The upstream auctions held have been successful, with deep-water acreage ones hoped to bring in $35 billion alone (here). And in June, the number of active offshore exploration rigs reached a 10-year high. Backed by Riverstone Capital and Miquel Galuccio, Vista just became the first independent E&P company to be listed on Mexico’s stock exchange (Bolsa Mexicano de Valores SAB de CV, BMV) since the reforms were adopted. And although still marginal at this point, there are now 17 non-PEMEX (Mexico’s national oil company) gas producers in the country.

Price caps (“first hand sales”) have been eliminated to encourage more upstream investment since output from unconventionals will be too difficult until prices increase significantly. And a must read EIA write-up here: “Mexico conducts its first natural gas pipeline capacity open season.” The National Hydrocarbons Commission believes that it could take a decade to produce 3-4 Bcf/d of shale gas. EIA sees Mexican gas production significantly taking off after 2025 (here).

One emerging problem is the July 2018 presidential election, where energy nationalist Andrés Manuel López Obrador has been leading in the early polls. In Mexico, presidents get just one six-year term without the possibility of running again. Although he likely can’t fully “bring back the old days of energy monopolies,” Obrador can surely create roadblocks to scare off foreign investors.

As for the U.S. gas industry, without the 4.5 Bcf/d gas export valve to Mexico, our prices would be around just $2.00 – 33% below the current market. The good news is that Mexico borders the U.S., so eventually our massive shale industry will naturally flow into Mexico as the North American energy arena becomes more integrated – which is an absolute must my fellow energy security advocates.