home Finance Only Recession Can Prevent An Oil Price Spike

$30 dollar oil is pushing a lot of producers under.

This environment will, in the long run, create an environment in which demand will outstrip supply.

Only a reduction in demand through a recession will stop this supply-demand imbalance from occurring.

The biggest result from the collapse in oil prices could be a future price spike.

Oil prices at $30 per barrel have put most producers under water. That has led to austere budgets and severe cuts to spending. Wood Mackenzie recently estimated that $380 billion in major oil projects have been delayed or cancelled since. That means that about 27 billion barrels that had been slated for production from those projects will now not be produced.

But more cuts are expected moving forward. “There has been a $1.8 trillion reduction in spending planned for 2015 to 2020 compared to what was expected in 2014,” historian and oil expert Daniel Yergin said at the World Economic Forum in Davos, according to the Telegraph.

The oil industry has long been spending beyond its means. The shale boom was made possible by the massive monetary expansion from the U.S. Federal Reserve since 2009, with near zero interest rates allowing nearly every mom-and-pop driller to access credit. The result was a surge in oil production. Many companies struggled to be profitable before the collapse in crude oil prices. Now most are losing money on every barrel sold.

But the problem is that the market will overcorrect. The $1.8 trillion cutback in spending that Daniel Yergin cites will lead to a shortfall in supply in the coming years. The world needs to replace about 5 percent of total production each year just from natural depletion. That is somewhere around 5 million barrels per day (mb/d) each year in new output.

Moreover, demand is expected to rise. The IEA says that oil demand grew by at a five-year high of 1.8 mb/d in 2015, and while that is expected to slow in 2016, the world will still consume an extra 1.2 mb/d of oil this year. That will continue to rise. Assuming a little more than 1 mb/d each year in new demand growth, the industry will need to supply an additional 7 mb/d by 2020.

But oil supply growth will be flat this year. OPEC has little room to expand beyond what Iran will be able to return to the market, which is somewhere between 500,000 to 1 mb/d. Other members could see production fall. Non-OPEC production, especially from the U.S., is expected to fall much more significantly in 2016. Other major non-OPEC producers, such as Russia andBrazil, will also see lower output moving forward compared to what everyone thought in 2014.

From today’s vantage point, that does not seem like a big problem given the fact that oil is down to $30 per barrel. But the five-year outlook is more worrying. The IEA estimates that global upstream investment fell by 20 percent in 2015 and could fall by another 16 percent this year. “This is unprecedented: we have never seen two years in a row of falling investment. Don’t be misled, anybody who thinks low oil prices are the ‘new normal’ is going to be surprised,” the IEA’s executive director Fatih Birol said in Davos, according to the Telegraph. 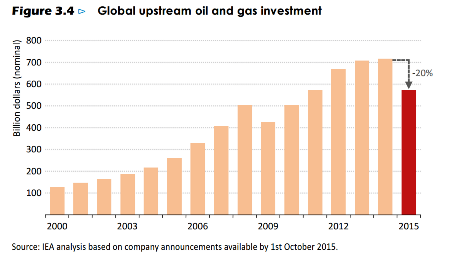 OPEC’s president Emmanuel Ibe Kachikwu agreed. “The bottom line is that production no longer makes any sense for many, and at this point we’re going to see a lot of barrels leave the market. Ultimately, prices will shoot back up in a topsy-turvey movement,” he concluded.

Shale proponents argue that oil prices will stay low for a long time because shale producers can bring production back online once oil prices rise to $50 or $60 per barrel. While that is true, it is highly questionable that shale can fulfill the large demand needs expected in the future, especially with so many large-scale deepwater projects now scrapped.

The market could overcorrect, leaving the world woefully short of supply in a few years. Of course, there is one scenario in which this price spike does not play out: the global economy enters a recession. A major recession could kill any prospect of a price spike by suppressing demand. Even ifn the economy does not crash, the slowdown in China could upend the business-as-usual oil demand scenarios.

Exxon Mobil (NYSE:XOM) just cut its forecast for Chinese oil demand to 2.2 percent each year through 2025, which is about 10 percent lower than its previous estimate. China’s energy consumption only expanded by 0.9 percent in 2015 while GDP grew at 6.9 percent (although there are some questions surrounding the reliability of those figures). Just about all energy forecasters dramatically overestimated China’s energy demand in 2015, including Exxon Mobil, BP (NYSE:BP), and the IEA.

So where does all of this leave us? To sum up, the simplified answer is that the severe spending cuts taking place in the energy industry right now will create the conditions for a price spike in the not-so-distant future. That is, unless the world economy, led by China, begins to falter.